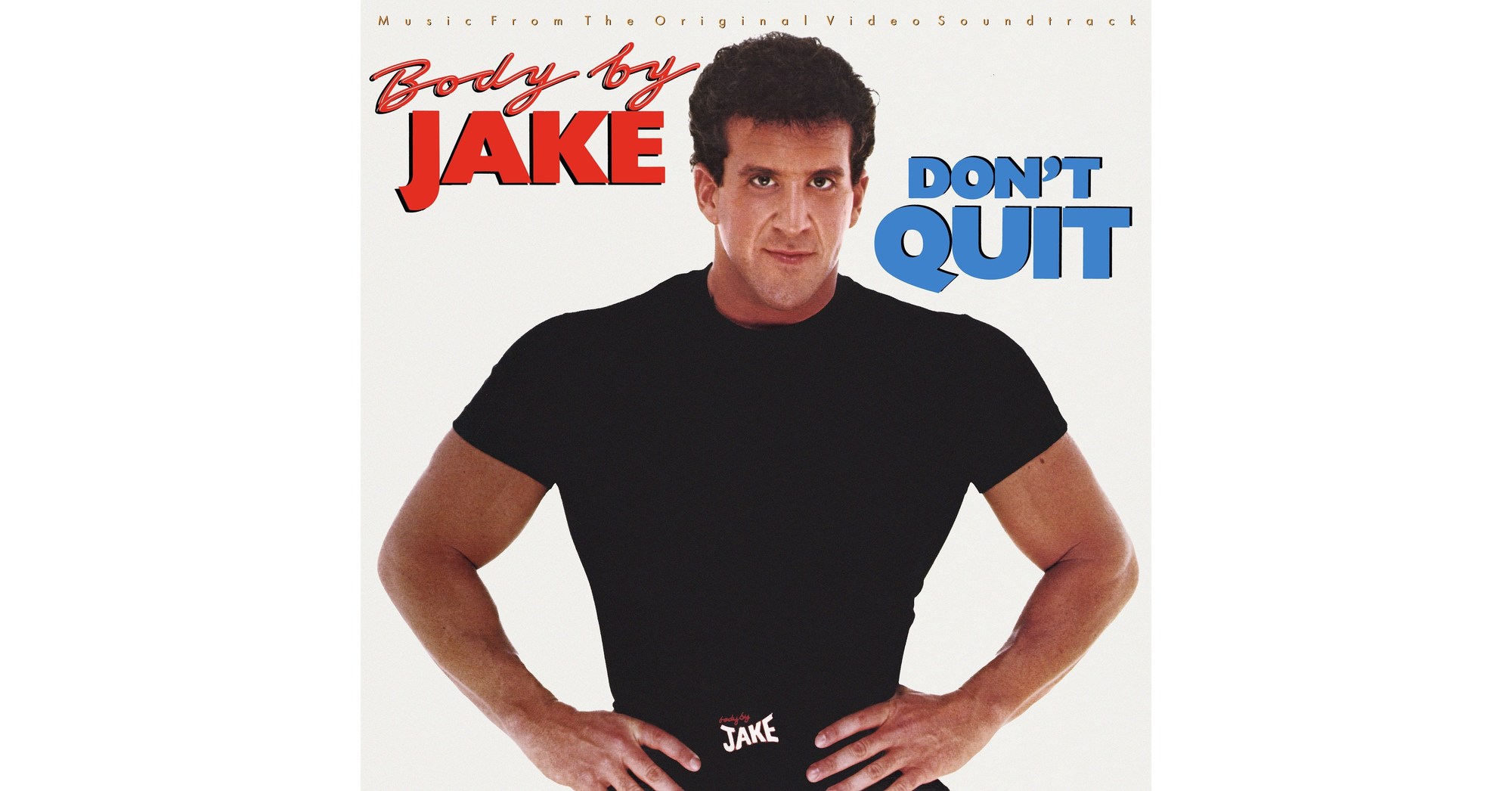 FEATURES HIGH-ENERGY, INSPIRING SONGS TO MOTIVATE YOU TO GET UP AND MOVE FROM BOBBY CALDWELL, MICHAEL SEMBELLO, JOSEPH WILLIAMS (TOTO), LESLIE SMITH (L.A. CARNIVAL), AND MORE

LOS ANGELES, Sept. 23, 2022 /PRNewswire/ — Emerging decades before the global popularity of “workout playlists,” Body By Jake: Don’t Quit!® is just one milestone among a laundry list of pioneering accomplishments from the timeless fitness personality Jake Steinfeld. Released in 1984, Don’t Quit!® was Steinfeld’s groundbreaking collection of all-original pump-up music, the first original soundtrack to an exercise video, a precursor to the type of curated playlists found on Peloton and the streaming services. The collection was executive produced by Steinfeld at the beginning of a storied career that now spans more than four decades.

Known throughout the 1980s as the first “trainer to the stars” thanks to a celebrity client list that included Steven Spielberg, Harrison Ford, Madonna, Priscilla Presley, Bette Midler, and more, Steinfeld made personal fitness training an occupation in the early ’80s, eventually going on to create the first exercise segments on cable television (CNN), the first 24-hour all-fitness television network (FitTV), and the first on-demand fitness television service (ExerciseTV), not to mention a branded fitness empire that has sold over two billion dollars’ worth of exercise equipment and counting, helping to get countless people around the world in shape.

Now, more than 35 years later, Steinfeld’s ahead of the curve album Don’t Quit!® has been revitalized for the digital age as it makes its streaming debut via Body By Jake Music/UMe, returning to raise heart rates, work muscles and move bodies once again. Featuring hitmakers like Bobby Caldwell, Michael Sembello, and Joseph Williams (Toto), the album has been unavailable since its original LP and cassette release in 1984 on MCA Records.

The album’s lead single, “Don’t Quit!®,” came courtesy of Bobby Caldwell, the smooth-soul multi-instrumentalist and hitmaker behind 1978’s “What You Won’t Do For Love.” A pulsating AOR-funk jam, “Don’t Quit!®” came complete with encouraging words from Jake himself. The 12″ mix ended up breaking the U.S. Dance Club chart.

In conjunction with the re-release of Don’t Quit!®, UMe has also released a newly enhanced, high-resolution version of the inspiring, flextastic music video for the title track, which was played in heavy rotation on MTV. Inspired by the Charles Atlas beach bully ads, the video features one of Steinfeld’s brothers as a muscular bully who steals the girlfriend of an archetypal nerd played by Michael Edwards who at the time was the number one male model in the world and Priscilla Presley’s boyfriend.

The crowded aerobic market of the early ’80s brought a slew of workout albums by the likes of Jane Fonda, Jayne Kennedy, Richard Simmons and more. But Steinfeld was left uninspired by their canned music and “one-and-two-and-three-and” instructions.

“I don’t think people thought about music the way I was thinking about music at the time,” Steinfeld says. “We created the album for people to work out to but to also play it loud in the car or when they’re doing housework and need something to pump them up. It was great music to motivate you and make you feel good. I’ve always been more about the motivation, more about the psychological, and more about visualizing success.”

More than just a song, the phrase “Don’t Quit!®” has been a motto that Steinfeld has carried since junior high school.

“I was cut from my eighth grade basketball team. True story. It was devastating. I was an overweight kid with a bad stutter,” says Steinfeld. “After I was cut I was given this poem from a friend which changed my life: ‘Stick to the fight when you’re hardest hit/It’s when things seem worse that you must not quit.’ In 1981, I trademarked the words ‘Don’t Quit!®.’ I have beaten the corporate giants of the world numerous times to keep those two words sacred.”

The Don’t Quit!® album, with production by André Fischer and Peter Bunetta, also features “Pump It Up,” a lively piece of digital swing via Michael Sembello, still fresh off of the No. 1 “Flashdance” mega-smash “Maniac.” The powerful voice of Maxayne Smith (the Ikettes, Maxyane) leads “Hard Work,” and Leslie Smith (a session pro known as part of much-sampled rare-funk crew L.A. Carnival) provides “Baby Work Out” and “You Can Get It If You Really Want It.” Notably, two pieces of breezy synth-rock, “Fire Power” and “Toughen Up,” come courtesy of Joseph Williams, a then-unknown singer and composer who would go on to provide the singing voice of the adult Simba in “The Lion King.”

“So, John Williams, the great composer, who I met through Spielberg,” recalls Steinfeld. “I was talking about the album, and John said, ‘You know my son is an artist.’ So, Joseph does two cuts, and he ends up becoming a lead singer for Toto. And to this day he’s still the lead singer for Toto. I had him first, man!”

Steinfeld first partnered with UMe to bring together his love of music and exercise with his record label, Body By Jake Music, which kicked off in 2012 with hour-long themed mixes organized by workout style, beats-per-minute and decade. Intended as “the fitness version of the Now Series,” the Body By Jake series, which includes hits and remixes from the biggest names in music, first appeared as CD and downloads and currently serve as popular streams on Spotify and Apple Music. More new mixes are in the works.

Steinfeld has been connected with music since the very beginning of his career: As an 18-year-old New York expat pumping iron in Venice, Calif., he was offered $100 to flex on stage as the Village People sang “Macho Man” as the song soared up the charts. Remembers Steinfeld, “All I have on is my posing trunks. I got baby oil all over my body… That was my intro to the music business.”

Over the course of more than 40 years as an American fitness icon, Steinfeld has been a New York Times and Wall Street Journal best-selling author, a sitcom star (The Family Channel’s “Big Brother Jake”), a voiceover actor (“Ratatouille,” King of the Hill”), a dominant infomercial guru, a Summer Olympic torchbearer, and even the Honorary Mayor of Pacific Palisades, Calif.

In 2001, Steinfeld created Major League Lacrosse, America’s first professional outdoor lacrosse league and in 2015 founded the World Series of Youth Lacrosse. He twice served as Chairman of the Governor’s Council on Physical Fitness and Sports under California Governors Arnold Schwarzenegger and Jerry Brown. Today he serves as Chairman of National Foundation for Governors’ Fitness Councils, bringing fitness education and brand new $100,000 state-of-the-art fitness centers to underserved kids across the country. The NFGFC has already dedicated DON’T QUIT!® Fitness Centers in 38 states plus Washington, D.C. and this year will gift three per state to elementary and middle schools in Idaho, Nebraska, North Dakota and South Dakota, with the goal of rewarding fitness centers to every state in the USA. Each fitness center is financed through public/private partnerships with companies like The Coca-Cola Company, Anthem Foundation, Wheels Up and Nike, and does not rely on taxpayer dollars or state funding. The foundation’s goal is to build a nation of the fittest, healthiest kids in the world.

But before all that was Don’t Quit!®, soon to be available once again for all to enjoy. 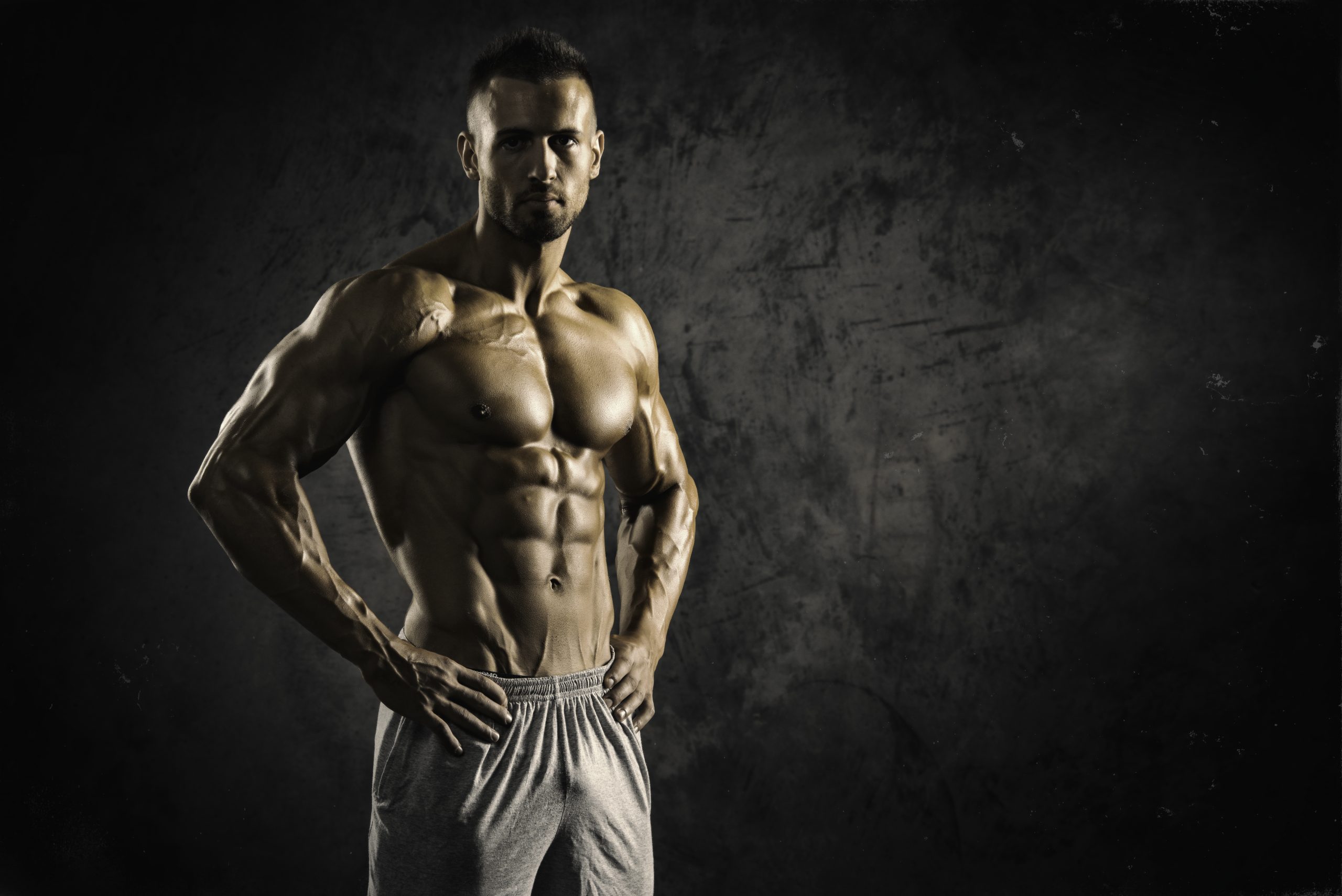 Explainer: What is Bigorexia, a condition triggered by bizarre fitness…

Muscle-oriented diets are a growing fad among adolescents and young adults. iStockBy: Kimberly Rodrigues“Bulking and cutting” is a dietary technique in wh 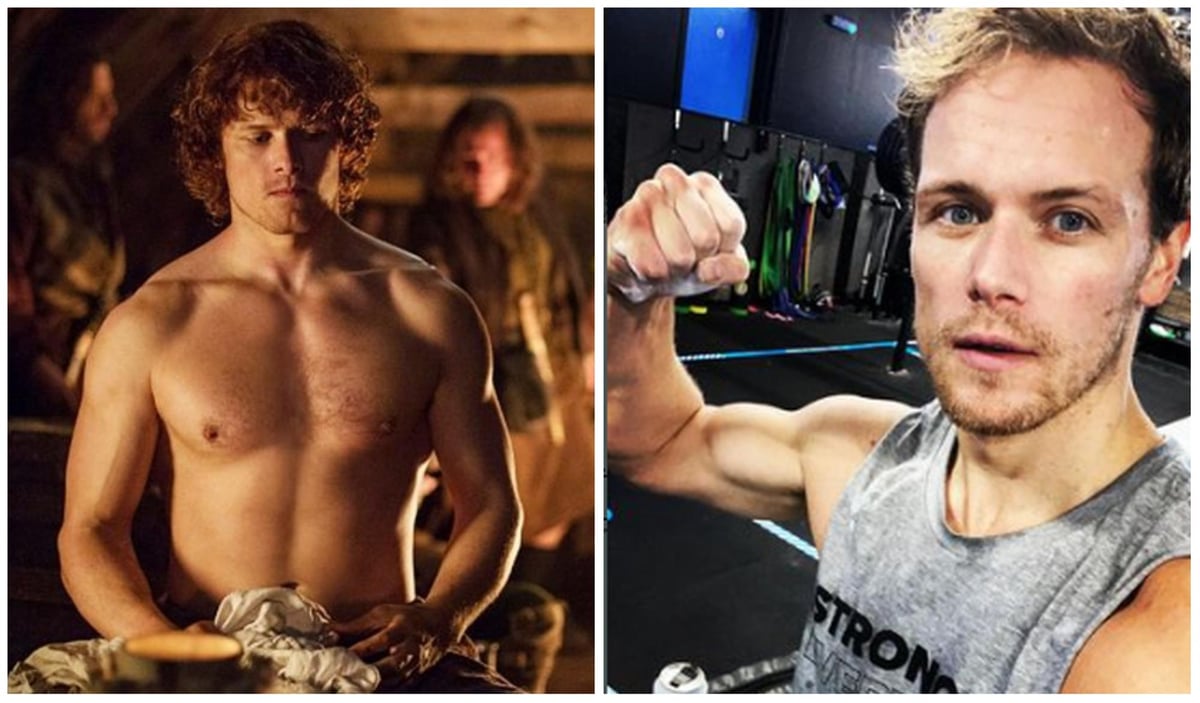 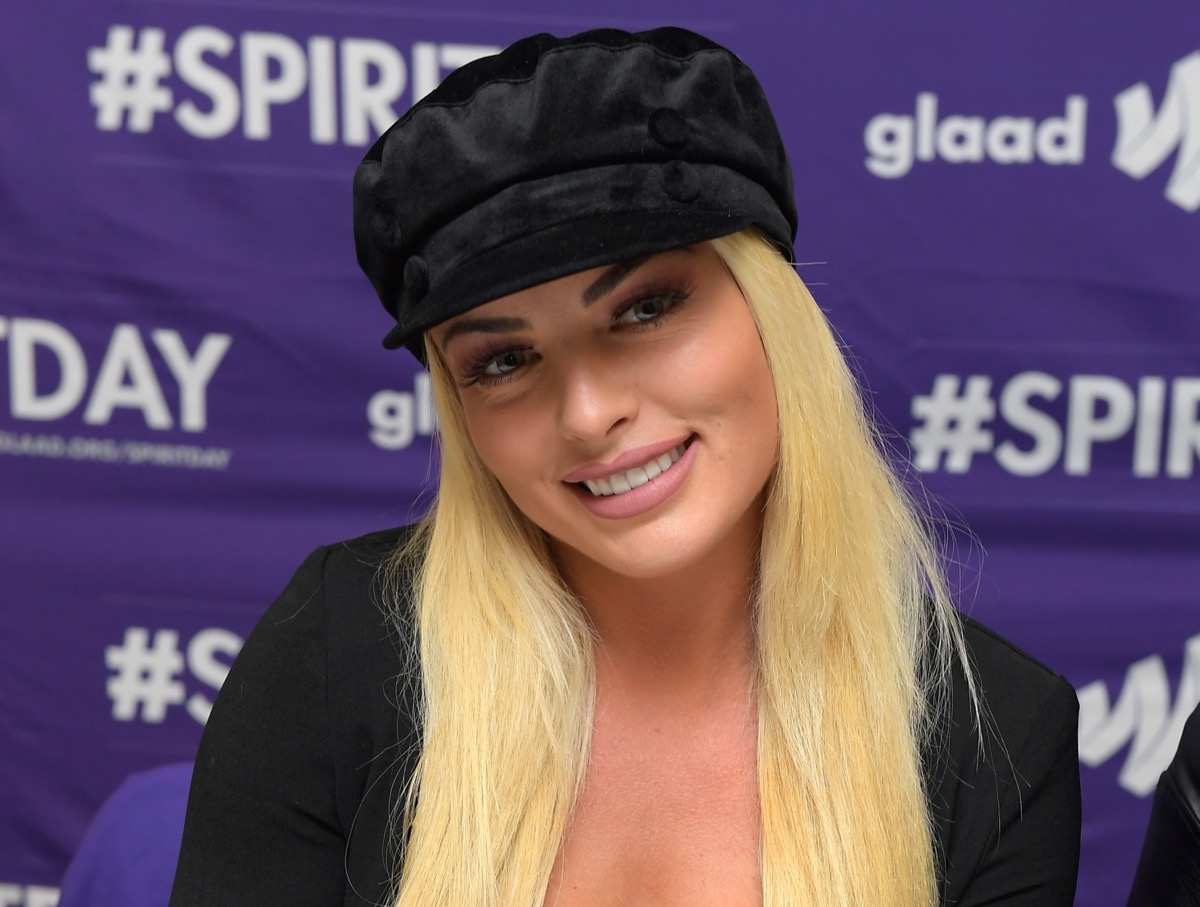 Mandy Rose is one of NXT's biggest professional wrestlers. She also shares a lot of stunning photos on her Instagram. Rose recently posted a ne